UPDATE: The new LED Lenser T7.2 is now available as well, featuring pretty much the same spec as below but with a few minor additions.

The P7 (and T7) have been extremely popular amongst our police and military customers, so I suppose it was inevitable that LED Lenser would eventually release a new version of the classic design. And here it is, the LED Lenser P7.2, and very nice it looks too. The same recognisable shape, very slightly larger, some rather attractive red detailing around the head and tail, and a hefty 60% increase in light output!

Here is what LED Lenser have to say about it:

The new LED Lenser P7.2 redefines performance, engineering excellence and desirability. From the inside out every aspect of this professional lighting instrument, an evolution of our ever popular P7, has been intricately re-evaluated to deliver an increased level of performance that sets it apart from the crowd.

The new P7.2 radiates desirability due to design enhancements that improve both functionality and appearance. A stylish new protective Matt Black anodised finish, not only looks smart and feels great in the hand, but also improves grip. The Dynamic Switch, which allows selection of ‘Boost’ ‘Power’ and ‘Low Power’ light options, has been made significantly larger with improved responsiveness. The increased size makes it easier to operate with gloves.

After extensive testing and evaluation we have selected from the very latest high performance LED range offered from this world leader and incorporated the most suitable LED into the P7.2. The result is a 60% increase in lumen output compared to the P7.

The patented Advanced Focus System lens of the P7.2 has been reconfigured and re-aligned to deliver our renowned ring-free bright homogenous white light over a significantly increased lighting diameter for improved visibility in either flood or spot beam. 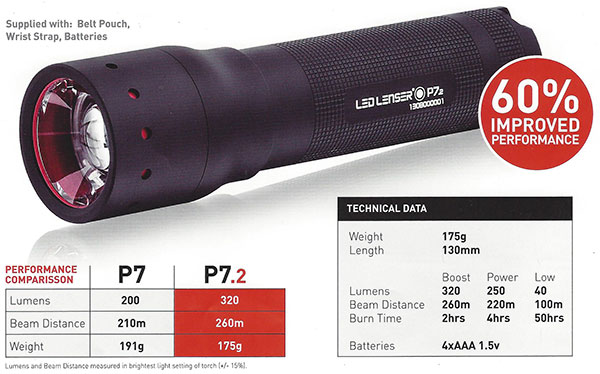 We’d recently updated our range of LED Lenser torches with all the latest models and I was mulling over what I could say about them that was a bit more interesting than just the usual tech specs. Then, out of the blue, I received this fascinating nugget directly from LED Lenser themselves.

Apparently their mad German designers have knocked up the largest torch in the world! This beast of a torch measures about 4 metres long (that’s about the size of a VW Golf).

Here is the press release straight from LED Lenser:

“LED Lenser, as the world’s leading torch brand, is no stranger when it comes to winning awards for design, technology and performance. Over the years our superb hand-held torches and head lamps have won numerous national and international awards.

On Sunday 25th September LED Lenser officially unveiled the World’s Largest Torch in front of an expectant crowd in the German City of Soligen at the Night of Lights Festival which attracts around 30,000 visitors. The LED (Light Emitting Diode) torch, nearly 4 meters in length and weighing 216kg, incorporated 19 high-end LEDs that generated an awesome 100,000 lumens of light. On hand to witness and verify this extraordinary testament to LED Lenser’s world-class engineering skills was a representative from the Guinness Book of World Records.

This record breaking torch was not only developed with size in mind, but also to highlight energy efficiency as well. Today’s LED lights are up to 13 times more efficient than conventional light bulbs, and last 1000 times as long. If a luminous flux of 100,000 lumen is supplied to the torch, it consumes 1000 watts of energy. In comparison, 250 conventional 40-watt light bulbs consume 10,000 watts of energy.

The design of the World’s Largest Torch by LED Lenser is based on the powerful and widely available LED LENSER X21 which features a Dynamic Switch, Speed Focus and the patented Advanced Focus System. Powered by just four standard D-cell batteries, the X21 emits a breathtaking 1000 lumens of light that has a range of around half a kilometer.

This dedication to be the best, combined with a magnificent feat of engineering, truly reflects the nature of LED Lenser – that of state-of-the-art innovation, technological superiority and world-class performance.”

Found a little video as well:

So there you have it.

Hello and welcome to our brand new blog. We hope to be bring you news, reviews, advice, and opinions on the best & latest police, security, military and tactical equipment. So let’s get started…